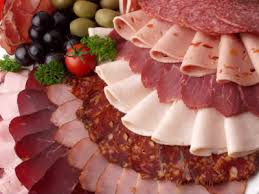 Cured Meat Consumption, Lung Function, and Chronic Obstructive Pulmonary Disease among United States Adults by Rui Jiang in the April 15, 2007 issue of the American Journal of Respiratory and Critical Care Medicine found, “Frequent cured meat consumption was associated independently with an obstructive pattern of lung function and increased odds of COPD.”  People who ate cured meats 14 times or more a month had twice the risk of COPD as those who did not eat these meats.  COPD is chronic obstructive pulmonary disease, commonly known as emphysema.

Comments: Cured meats, such as bacon, sausage, ham, and luncheon meats, are high in nitrites, used as preservatives, antibacterial agents, and for color fixation.  Nitrites generate reactive nitrogen compounds that may damage the lungs, producing emphysema.  Therefore, in addition to obvious lung toxins, like cigarette smoke, what people eat can also cause debilitating lung disease.  At the other end of the spectrum of food choices, eating fruits and vegetables is associated with healthier lung function.

Foods can be an important part of lung disease prevention, and a healthy diet can also help people with lung disease in three ways: