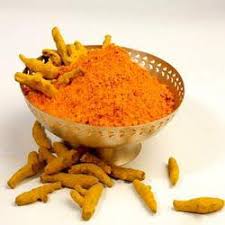 The most active ingredient in turmeric root, bisdemethoxycurcumin, boosts the activity of the immune system in Alzheimer’s patients, helping them to clear the amyloid beta plaques characteristic of the disease.

Using blood samples from Alzheimer’s patients, Drs. Milan Fiala and John Cashman have shown that bisdemethoxycurcumin boosts macrophage activity to normal levels, helping to clear amyloid beta. Fiala and Cashman also observed that bisdemethoxycurcumin was more effective in promoting the clearance of amyloid beta in some patients’ blood than others, hinting at a genetic element. Further study revealed the genes involved are MGAT III and Toll-like receptors, which are also responsible for a number of other key immune functions. Bisdemethoxycurcumin enhances the transcription of these genes, correcting the immune defects seen in Alzheimer’s patients. Proc Natl Acad Sci U S A. 2007 Jul 31;104(31):12849-54.