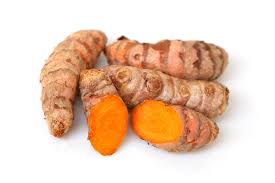 Curcumin, the major constituent of turmeric that gives the spice its yellow color, can correct the most common expression of the genetic defect that is responsible for cystic fibrosis, suggests an animal study published in the Science (April 2004). Cystic fibrosis, a fatal disease that attacks the lungs with a thick mucus, causing life-threatening infections, afflicts about 30,000 American children and young adults, who rarely survive beyond 30 years of age. The mucus also damages the pancreas, thus interfering with the body’s ability to digest and absorb nutrients.

Researchers now know that cystic fibrosis is caused by mutations in the gene that encodes for a protein (the transmembrane conductance regulator or CFTR). The CTFR protein is responsible for traveling to the cell’s surface and creating channels through which chloride ions can leave the cell. When the protein is abnormally shaped because of a faulty gene, this cannot happen, so chloride builds up in the cells, which in turn, leads to mucus production.

The most common mutation, which is called DeltaF508, results in the production of a misfolded protein. When mice with this DeltaF508 defect were given curcumin in doses that, on a weight-per-weight basis, would be well-tolerated by humans, curcumin corrected this defect, resulting in a DeltaF508 protein with normal appearance and function. In addition, the Yale scientists studying curcumin have shown that it can inhibit the release of calcium, thus allowing mutated CTFR to exit cells via the calcium channels, which also helps stop the chloride-driven build up of mucus. Specialists in the treatment of cystic fibrosis caution, however, that patients should not self-medicate with dietary supplements containing curcumin, until the correct doses are known and any adverse interactions identified with the numerous prescription drugs taken by cystic fibrosis sufferers.