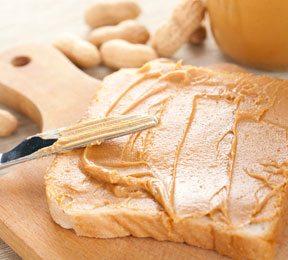 Think PB&J is just a boring lunchbox staple? Here’s something exciting: It may actually help stave off breast cancer.
A recent study found that eating peanut butter regularly as a girl appears to decrease the risk of developing benign breast disease, a known risk factor for breast cancer, as an adult.
Discover other risk factors for breast cancer.
For the study, the researchers collected diet questionnaires from more than 9,000 girls who were between the ages of 9 and 15. Then the researchers followed the girls for the next 14 years. At the end of the study, the young women who ate peanut butter or nuts two days a week as girls were 39% less likely to have benign breast disease. Girls who ate a daily serving of a food containing vegetable protein and fat — most commonly peanut butter, peanuts, other nuts, beans or corn – had a 68% lower risk. The foods were linked to a lower risk of benign breast disease even in girls with a family history of breast cancer. The researchers can’t yet explain the connection, and they note that the study doesn’t prove a cause-and-effect relationship.
What Is Benign Breast Disease?
Benign breast disease is a common condition marked by non-cancerous changes in breast tissue, including things like irregular lumps, cysts or masses. The changes may be related to fluctuating hormone levels over the menstrual cycle and at other phases of a woman’s life, including pregnancy and menopause. About one in four women will have some type of benign breast disease before menopause. While the great majority of benign breast conditions don’t lead to breast cancer, certain types can.
Advertisement